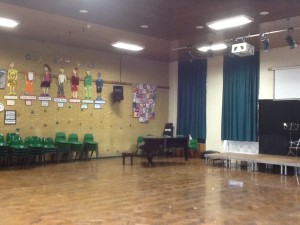 Chalmor’s ReFit T5 system was used to replace less efficient T8 fittings in classrooms. This direct replacement decision was influenced by the risk of asbestos in ceilings. Occupancy sensors were fitted to save energy whilst classrooms were not in use. The sensors were wall mounted, again considering asbestos risk. Ambient light sensors were used in perimeter lighting, to switch lights off when daylight was sufficient.

The multipurpose hall required special attention due to its wooden tongue and groove vaulted ceiling, with flush mounted lighting. The school had been experiencing frequent failure in this hard to reach area, requiring a scaffolding tower for maintenance.

Three alternative lighting designs were considered, to provide adequate light levels, using the least energy and camouflaging the holes left by previous lighting so the school did not have to repair or redecorate the ceiling. A long-life system was key, to reduce maintenance requirements.

Occupancy and daylight controls were added, plus switches to light the stage independently for school productions.

The hall project was scheduled over school holidays, due to its frequent use for assemblies, lunches, drama and PE classes. Through liaison with the premises team, Chalmor was able to install the classrooms during school hours. Work was completed one classroom at a time by small teams of engineers, enabling the school to move classes for short time periods, minimising disruption.

A schedule of equipment was developed for each area, which provided costs for the school and could be used by the engineers for installation and quality surveyors for signoff.

Careful planning and an understanding of the health and safety requirements in this school environment ensured a smooth running project with successful delivery. Chalfont St Giles School were so happy with the results of the hall and classroom projects, that another project was then scheduled to replace lighting in the cloakrooms.